The Girl in the Bubble


As I have said before, one of my target locations for photographing was the Embankment in London.  I found various street performers entertaining the evening crowds on a cold February evening and was particularly struck by these folks creating giant soap bubbles and the extraordinary interference patterns created by the setting sun in the bubble surfaces.  It was a challenging light as dusk approached and the light levels fluctuated as the sun dropped between the buildings along the river.  All images were taken with the Canon 5DMkII with the 24-105mm lens and f/4 and at ISO1600 or ISO3200 to give shutter speeds appropriate to keep the bubbles sharp.  The images look a little sludgey in these thumbnails, but look much cleaner in slideview.
I started off with a shot with the light behind me showing the performers and their initial audience.  My first thoughts were that there were too many people, too many distractions and the light was not right for the bubbles which failed to really stand out. At this point I decided that the key shot would be get the performers or watchers actually pictured through the bubble films themselves and set about getting into the right position to achieve coincidence of people, light, background and sunset.  I also wanted to capture the bubble lifetimes from beginning to end ...  Overall, I realised from the outset that was an ambitious attempt, but it was likely to be a one off opportunity, so worth the effort. 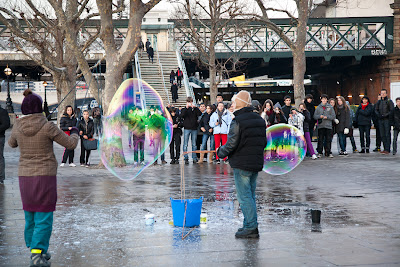 The next shot zoomed closer to the action to give the bubbles more impact and also went slightly to my left to get the bubble away from the tree in the background. 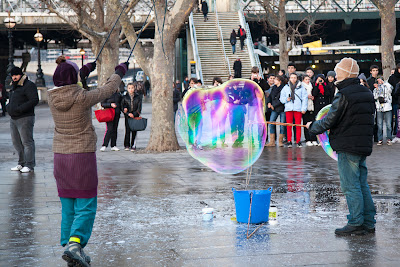 For the next image I moved right round the performers to shoot back into the light and start to focus in on getting people images through the bubbles.  The light on the bubbles was better but the background was a mistake with the overpowering influence of the lamp post and tree detracting from the photograph, so time to move round .. 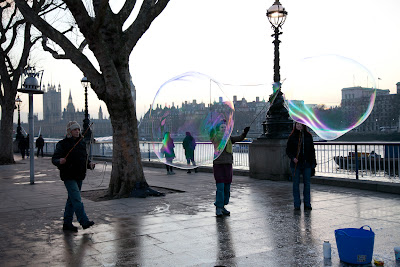 An improvement, but the move to the right to get the tree further left, plus a step closer, did not significantly improve the image I didn’t think .. 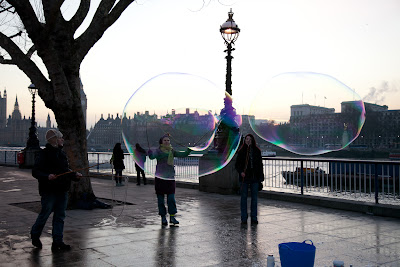 Further to the right and I’ve got rid of the tree, but the sunlight flared over the buildings which gave a great boost to the interference pattern colours in the bubbles . 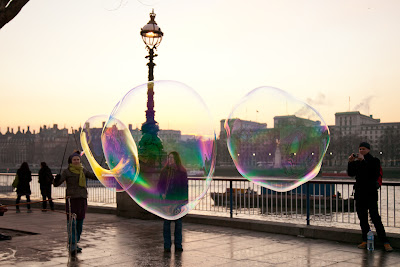 I felt that I needed to get closer for the next picture and started to home in on the performers themselves; the capture of the bubble bursting was a happy fluke! 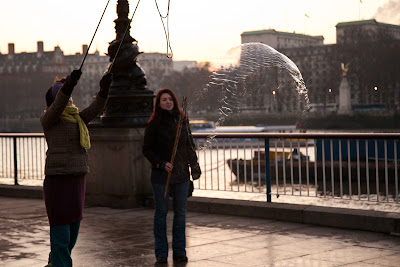 A move round to the right and back a little for the next shot, and I went for the vertical to add Big Ben to the image and give the show some context and location. 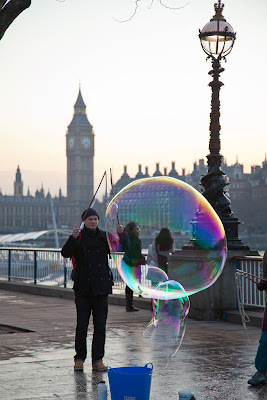 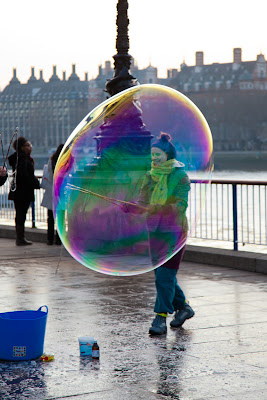 The next photograph was my favourite of the sequence.  The bubble was huge and a beautiful shape, just catching the rays of the setting sun.  What makes it for me is the look on the girls face and her eye line. 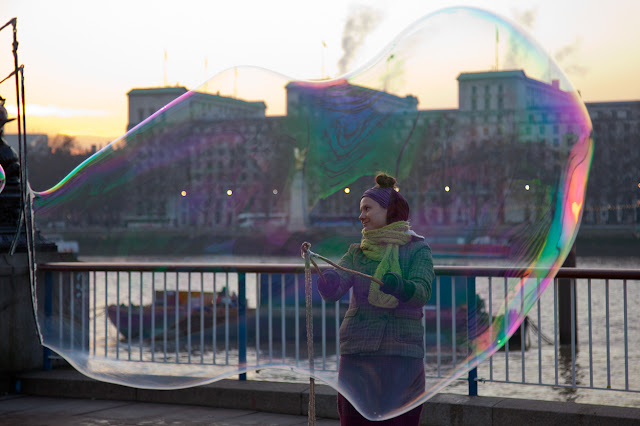 The bubble blowers were beginning to get some attention from other photographers and I moved much further to the left to get them in the frame. 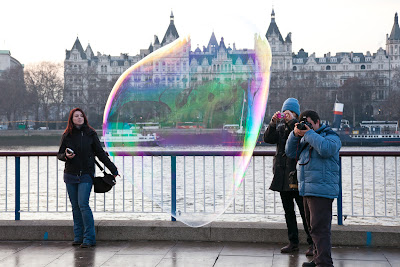 Zoomed in on the next bubble to get the photographers behind it .. 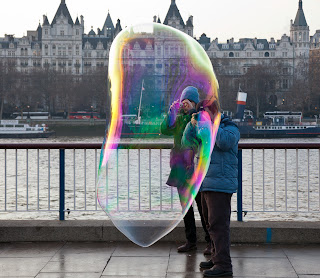 The final photograph focused on what I felt was the most compelling image of the series – just a single isolated bubble with a lovely reflection of the embankment and trees in the surface film along with the interference patterns. 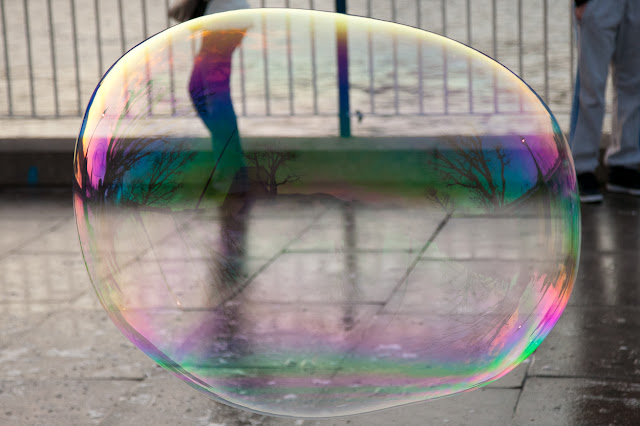 I did actually have one more photograph, which showed the demise of the bubble as it hit the ground; I was very lucky to capture the moment at which only half the bubble was still visible. 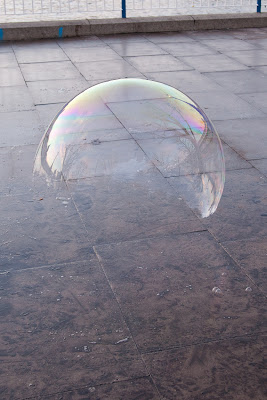 I found this exercise a considerable challenge and made several false starts before I got something I was happy with.  I should have taken more shots early in the sequence (probably two or three more) to give something intermediate between the distant shot of the crowd and the where I started to home in on the performers and the bubbles, but there were no further opportunities given that it was nearly dark throughout the shoot anyway!  The location on the Embankment was a reasonable spot, but limited in that it was not possible to get to the other side of the performers to shoot with the light behind (the Thames was in the way ...) and there was quite a crowd that it was difficult to work round to change position quickly.  Overall, I was pleased with the outcome and I felt I learnt a lot from it in terms of positioning, the need to move, zoom or both, the impact of radical changes in lighting and the need to deal with mobile performers and random passers by.  I was pleased that I spotted the possibilities of getting reflections in the bubbles as well the more obvious interference patterns.
I plan to repeat this exercise in a situation where there are more people and will blog what happens after I attend a couple of agricultural shows in the near future, although that is likely to be after I have completed this part of the course.  I don’t feel all that happy about photographing people, although these street performers were obviously willing to be photographed by various tourists and students doing OCA courses and they were collecting anyway!

Email ThisBlogThis!Share to TwitterShare to FacebookShare to Pinterest
Labels: 1 The Frame, Exercise 08 Sequence of Composition