The feedback on Assignment 1 and on my initial efforts in The Art of Photography have just been received from my tutor, and I am pleased with a very positive response to my approach to the exercises, the research around the subjects, the structure and content of the blog and the majority of the images submitted for assessment.  There are a few of the sixteen submitted images that I plan to re-shoot, two just requiring adjustments to the lighting to emphasise the quality of the contrast I was attempting to display with the subjects I chose, and one that needs a re-think.
The overall summary was:-


“You made a very good start to your start to your course.   Your photography is up to the expected standard at this stage of the course and you have dealt with this assignment very well.
Your log is comprehensive and complete and impresses me with the full treatment you are giving your exercises because this is an important component in your learning experience.
My examination of your images and the other contents of your blog indicate that you have taken one of the most important steps to successfully completing this course which is to allocate sufficient time to general study, working on the exercises and consideration of the requirements of the assignments”.
Response to the contrast ‘straight’ was that the “ image interprets the contrast very well but I would draw your attention to the rather bald sky in which there is almost no tone at all”.  I totally agree with this and I’ve looked back at the image in Lightroom but there is nothing in the way of tone that can be extracted from the sky in the image as shot, but I will certainly be more aware of this in the future.
My tutor’s view of the ‘soft’ image was that “The success of the image of a powdered substance rests in its generally accepted reputation for softness.   Your image of the feathers could have succeeded if the colours were softer, say white and floating in the air rather than at rest.   Your image is dark and rather inexplicit for the task”.  I wondered about this at the time as I did not use the sweet/orange and sour/lemon images for my final submission because it relied entirely on the viewer knowing that oranges were sweet and lemons were sour and this could not be informed by the image alone.  I should have wondered some more and not used the powders maybe ..  The image is indeed dark and has been lightened as below. 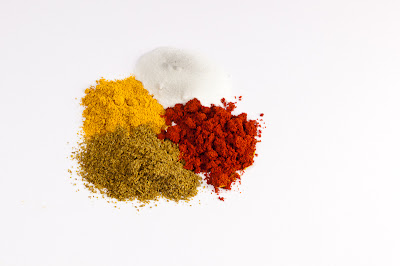 However, a little later I gave further consideration to this and decided to drop the powders for 'soft' and to shoot an image that was aligned with the ball theme I had used for 'hard'.  To this end I produced the following: 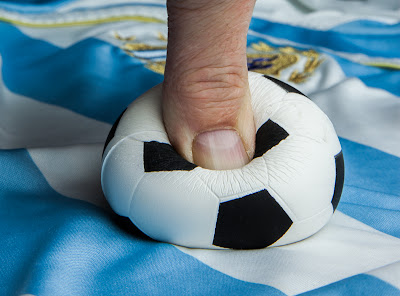 Interesting that the tutor comment mentioned the feather, because as it happens, my original efforts at ‘soft’ did involve dropping the feathers down in front of a white backdrop and photographing them as they fell, but I failed to get an image I was satisfied with.  However, I do plan to come back to this in the future.
The tutor view of ‘hard’ was that “In my opinion the cricket ball does look harder by virtue of its glossy surface.   If you restricted your choice to the salt crystals alone and lit it to pick up their reflective nature it could have succeeded better”.  The cricket ball does indeed look hard, especially as the light was catching the gloss of the wax, so this would have been a better option to offer as ‘hard’.  I have added this image to the portfolio to represent this contrast for my final submission.. 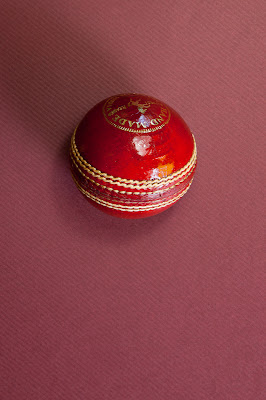 The rough surface of the tree bark was seen as successful, but the wooden fish not so.   “The surface grain pattern on the fish is unsuccessful in giving the impression of smoothness (Although it may well feel smooth to the touch).  The strong surface pattern disguises its true qualities.  If you positioned your subject in relation to the light source to create a shine on its surface it could have achieved the effect you were looking for”.  I took some more pictures of the fish with the lighting specifically set to show the smoothness of the surface.  I did this by ensuring that the natural daylight was from the front of the fish and used a shallower depth of field (f/6.7) to throw the tail out of focus and emphasise the head where the shiny smoothness was apparent.  I also took more time to set up the shot and photographed it in such a way that it was nicely set up with a  white foamcore board some way behind to give a diffuse and featureless background to emphasise the fish. 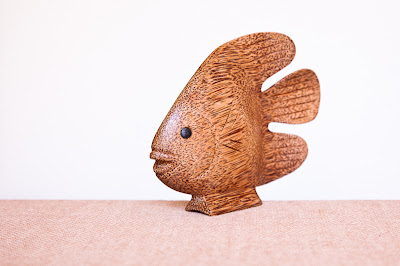 My version of ‘high’ was the 310m high ‘Shard’ in London – can’t get much higher than that – and it was seen as a successful image.  ‘Low’ was a failure with the comment being  “I am afraid that the point of this image escapes me.   You took your first image from the ground; looking up to get the effect of height and a suitable contrast could have been obtained from a high viewpoint looking down using the perspective to give the impression of height.  Please do not take any unnecessary risks”.  I agree absolutely that ‘low’ missed the point and was an image that offered nothing.  I wanted to stay with the architectural theme and looked through some of the images I took at the London Eye where everything on the ground looks low!  My selection as a replacement image was an image of Westminster from the top of the Eye. 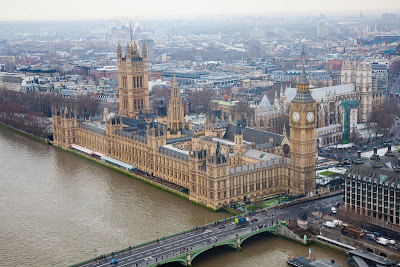 I have spent nearly a year looking for an image to try and replicate the view of the Shard, except looking down instead of up.  I think I finally got close and will be replacing the above image with the following as my submission 'low'.  Shot at a very high ISO of 3200 and even then only getting 1/20sec shutter speed on a moving escalator, I managed to get some of the shapes of the Shard reflected in this image. 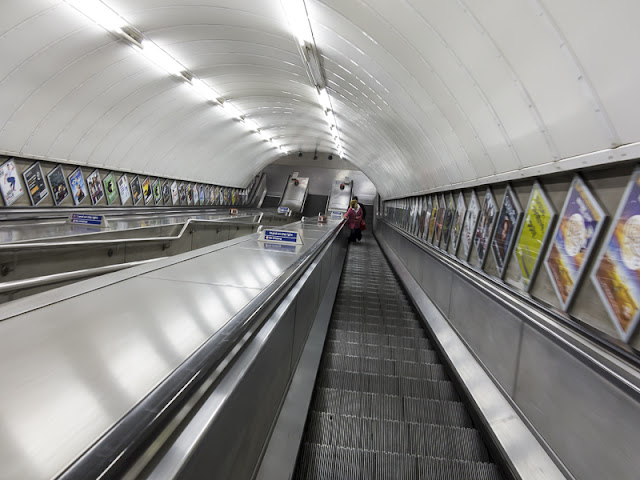 Now back to my original feedback response ....

Other image pairs not specifically mentioned were seen as successful from the perspective of Assignment 1.
My ‘high/low’ contrast pair was not very successful with the ‘low’.  I obviously need to work on my ‘lows’ or just find another contrast pair!!!  I will consider this over the next few days and submit a further image.

After some thought about what I was really trying to show here, I went for one of the images taken from the top of the London Eye which showed an empty capsule and some of the superstructure taken from the very top of the Eye (high!), and London down below (low!). 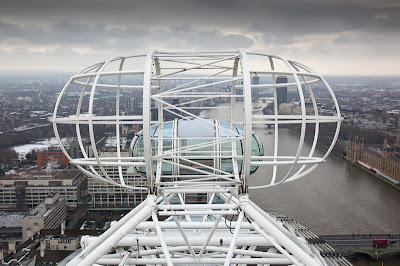