The exercise calls for four photographs which show curves and their defining role in demonstrating movement and direction.  I used the opportunity of a day’s photography at the Royal Horticultural Society’s gardens at Wisley in Surrey to look for elements of design and found it an outstanding venue for this with architectural elements as well as plant layouts and the gardens themselves all providing some excellent opportunities.  This was a planned assignment where prior research revealed the likelihood of finding a number of ‘target’ images to comply with several elements of this specific unit.  Curves were certainly available from what I had seen, as were opportunities for patterns and rhythms.  Obviously as a garden where people would be staring at things I hoped to be able to find images for the ‘implied lines’ exercise, although this would clearly depend on what I happened to spot during the day and my overcoming something of a hesitance to take candid pictures of people I don’t know!  It was disappointing that the weather on the day I went was raining and dull which detracted from some of the outside images, creating a rather flat and lifeless light.  Just have to go back.
Curves obviously show a gradual change of direction, and often of rhythm, and therefore as graphical devices are very different to horizontals, vertical and diagonals.  Freeman (2007) describes curves as a series of straight lines which gradually change direction to form the shape of the curve, and I guess that if we regard the way the eye travels along a curve as a series of steps, then that might be regarded as true.  Curves are able to convey feelings of both speed and acceleration and even slight curvature to a line establishes a different understanding in the viewer to that felt if the line was completely straight.  Curves are progressive and give the impression of being flowing, smooth and elegant compared with diagonals which have more dynamic and active qualities.

Curves need to be real curves to exist in a photograph, whereas diagonals have just to be straight lines which are made apparently diagonal by the viewpoint and/or camera angle ... so curves have to be found rather than created, or at least created by implication where a series of points delineate the shape of the curve.

My first image was inside the new glasshouse complex.  This was only opened in 2007 and contains many flowing elements of ‘modern’ design compared with older glasshouse structures which are often comprised of highly functional, and usually structural, straight lines only.  The picture was taken from the viewing platform at the top of the glasshouse where the rails and walkways have some wonderful curves which have tremendous flow and movement to them.  The photograph was taken with a 70-200mm lens at 70mm which accentuated the curve, and f/8 kept the immediate foreground and background out of focus to further emphasise the sweeping curve of the rail. 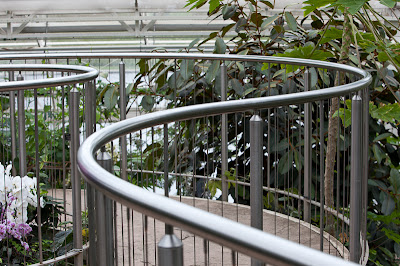 The second image was taken outdoors and shows another sweeping curve shape.  The rail is strongly curved and seems to hold back the flowerbed whilst leading the viewer upwards to discover the visitor standing at the top.  The point of focus was where the horizontal line formed by the retaining wooden barrier meets the curved rail and an aperture of f/6.7 allowed the image to run from an out of focus foreground, round the curve to the figure. 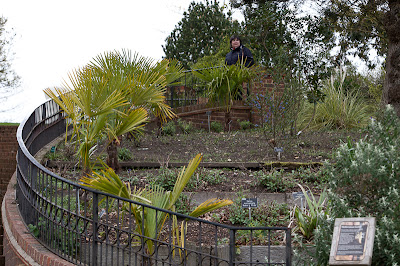 The next image was taken on the approach to the glasshouse around the lake and the sweeping concentric curves of the lake edge, grass, flower beds and path I thought had a really dynamic quality to it as it leads round to the structure.  The stripes cut into the grass accentuate the sense of movement in the image and I felt that the few people moving along the path who were mad enough to be wandering around in the rain, also added to the movement qualities of the photograph.  This was taken with a 24-105mm lens set at quite a wide angle of 40mm to capture the whole scene. 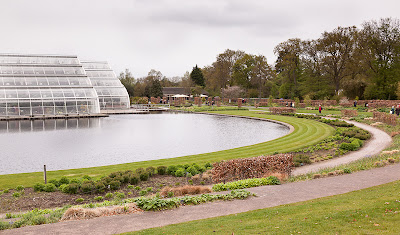 I also took an alternative image of the scene at the same time, but with the lens set at 105mm and in a vertical format.  This homed in specifically on the curves, but I didn’t feel that it was as successful an image as it lost much of the direction and dynamism, as well as the sweeping breadth of the first. 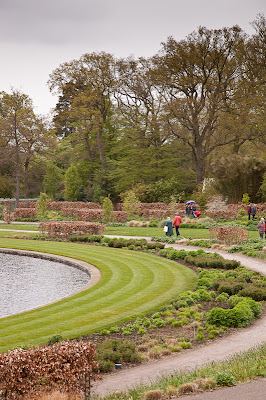 My final image is rather different in that rather than a single curve,  it shows a series of linked curves which relate strongly to horizontals and verticals.  This is a close up of the main glasshouse structure which is composed of a series of flowing curves which lead the eye in a rhythmical series of steps to the apex of the building.  I took a large number of images of the glasshouse architecture as features of its design exemplified several aspects of ‘Elements of Design’ extremely well. 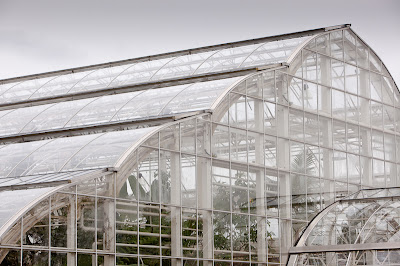 This was one of the most rewarding exercises so far because of the ‘assignment’ approach I used, as I set out with specific intent of not using any existing material, but to generate new images as a ‘one off’ effort..  The opportunity to identify a location, use the RHS website to research details and then to use Google Earth to evaluate the likely potential of different viewpoints added greatly to the value of the experience.  I thought the rain and flat light detracted from the visual energy of some of the images, but I’ll be going back there, and at least it stopped too many people standing around on my curves !!