First of all, in case anyone has a laugh at the directional arrows on my first implied lines exercise, you try doing it with one finger on a laptop mouse pad!!  I could repeat it at home on the Wacom or with the Photoshop pen tool, but then this is art ... !

The human eye will follow a line and the brain will imagine a line by following a row of disconnected points or other visually leading devices, and imply its own line structure.   Strong and continuous diagonals and curves draw the eye more powerfully than the subtlety of implied lines, but we require remarkably little for the brain to fill in the gaps between points or to follow the line suggested by the direction in which the eyes of people in photographs are looking or their heads are turned.  Movement implied in photographs also causes the eye to look ahead of a moving object, and the use of slower shutter speeds to show movement and imply a direction of travel is a well accepted graphical design element.  Implied lines can also be derived from rows of points or extensions of existing lines where these suggest continuation in a particular direction.


Humans have a very strong imperative to look at other human faces and are drawn to these when they view photographs as well as in reality, and it is natural therefore that we will follow the gaze of people in life as well as in photographs.  I have blogged about the Gestalt Laws of Perception in the past (blog post on Exercise 16), and this characteristic of human behaviour is an example of the Gestalt Law of Good Continuation in action.  What are people looking at and why leads us on to other elements of a photograph.

The exercise firstly required me to look at the pair of photographs provided in the OCA course notes.  Both of these are readily available online by searching Google Images, from where they can be downloaded for the addition of directional arrows as is required by the exercise.  The first image I looked at was ‘Threshing corn in Sicily’ by Gotthard Schuh and shows two horses running counter-clockwise around the farmer.  There is a clear implied line of directional travel of both the horses as they gallop and I have shown these with red arrows.  The farmer looks to be stepping forwards as he works and again I have used the red arrow to define the implied line along which he is moving.  I also saw some very strong eye lines in this images, firstly from both the horses as they look in their direction of movement, and secondly from the farmer as he looks forward,  presumably to the corn.  If I was to pick the most significant of all the lines in the image I would say that the eye line of the closest horse dominates the photograph, probably because it is the largest and closest element of the image, and also perhaps because this horse is well above the line of the horizon which adds to its prominence. 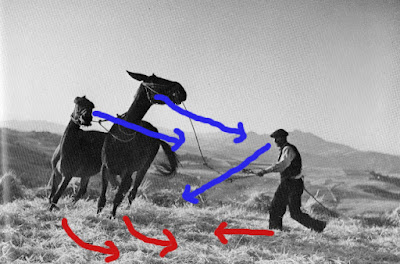 The second image comes from Michael Freeman himself and shows a torero executing a pass with the pink and gold capote, or cape (the red cape comes later in this barbaric spectacle).   In the photography the movement and direction of the bull can be seen in from the dust which has risen from the hooves as the animal charged, so I see a clear directional line implied by the movement of the bull (red arrow).  The capote is swept from in front of the bull with the right hand and away from it with the left hand as the pass is executed.  Therefore I have marked two more directional lines in red.  The eye line of the torero is distinctly down at the bull, and is marked with a blue arrow. 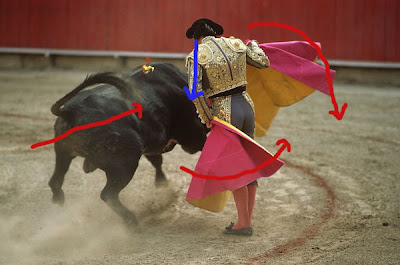 The second part of the exercise asks that I take three of my own photographs and perform the same analysis.  For my first, I have taken an image from my visit to the RHS gardens at Wisley (see blog post on Exercise 19) of someone looking at a booklet.  There is a very clear implied eye line as she looks at what she is reading and the eye line is marked with a blue arrow. 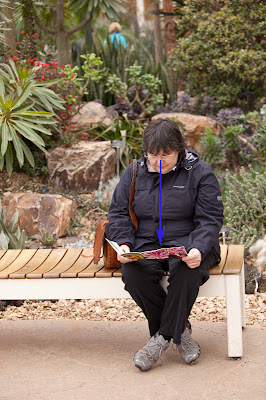 My second image shows the West Country class steam locomotive ‘Wadebridge’ approaching Ropley Station on the preserved Watercress Line in Hampshire.  The steam flowing behind the engine clearly suggests forward movement and direction of travel, and again the direction of movement implied is indicated by the blue arrow. 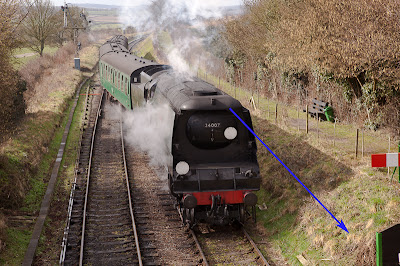 My third photograph shows a boat on the River Thames in London.  The wash at the bow, the direction of the flag on the bow and the sharper construction of the bow itself imply forward movement, shown here with red arrows for contrast.
﻿ 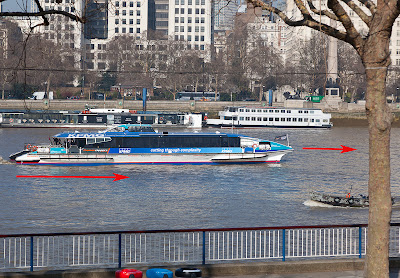 The final part of this exercise asks that two further photographs are taken, one to suggest an eye line and one to show the extension of a line or lines that point.  I thought about eye lines and decided to look for an image with single and clear lines and another where there was interaction between individuals and multiple eye lines.  The first is simply a picture of two people looking at a sign board in a garden where the eye line of both are clear and unambiguous.  The second (actually taken a shutter speed of 1/15sec through a waterfall) shows multiple eye lines (arrows in blue) which themselves seem to form a series of linked points and form their own implied line moving from the woman on the left, to the adult and child and to the woman in red and then in the direction of her gaze.  In a way, this almost addressed the brief for both photographs in a single image, although I did produce one more image to exemplify lines that point. 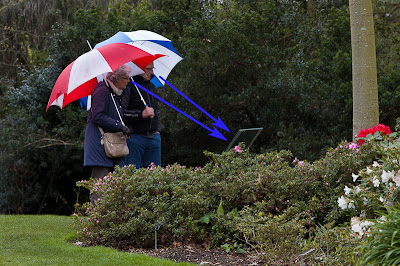 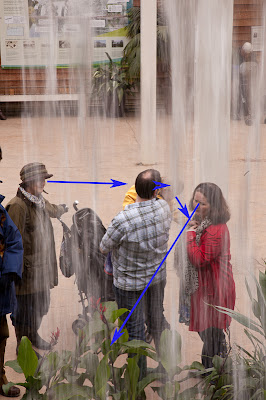 This final image shows two very dominant lines in terms of the grass and lake borders which point strongly to the building at the end of the lake and lead the eye there.  Indeed, the plant pots could also be construed to form a line of points which lead the viewer in the same direction. 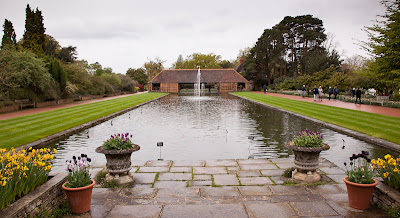 ﻿
This exercise revealed some unexpected themes around people and eye lines.  On the face of it, where a human subject is looking in a photograph is a simple enough concept in terms of understanding the implied line, but there are complex interactions between people in different situations which can complicate things and give rise to other lines – I found this in my waterfall picture in this exercise – there’s even an implied triangle in there as well.