This final exercise leads us to the point of defining a single image suitable for the cover illustration of a magazine, and the topic is rain.  Now, as a UK resident finding rain is not difficult, but I really need to think about this in terms of the effects of rain and not necessarily just take pictures of the endless rainfall!


I considered a number of options here including subjects like umbrellas, wellies, raincoats etc. all with rain on, but that began to feel too much like the developments of a rainwear catalogue and was not specific enough in its indication of rain as the main subject.  Rain in headlights, splashing in puddles or ponds, falling against the dark sky, running down a window were all angles I have been considering, as have been flooded roads and rivers and raindrops on leaves and fruits.
Earlier in the blog I took some images of rain, and there I used rain splashing in the garden pond, a rainbow, a kingfisher in the rain and rain falling on an umbrella.  All these visually describe rain or the effects of rain, but other than the possibility of the rainbow, I really didn’t feel that any were of sufficient merit for a front cover.  In the end I decided to go for a close up shot of someone in wellies splashing in a puddle; admittedly, the source of the water could have been anything, as indeed many rain shots can be, but it’s obviously a puddle and it was fun to do anyway!


The requirement was for a magazine cover, so I shot this in the vertical and I used slow enough a shutter speed of 1/125sec to get the splashes to blur yet retain some structure.  The rest of the text was just a bit of fun and was added in CS5 to comply with the magazine cover guideline. 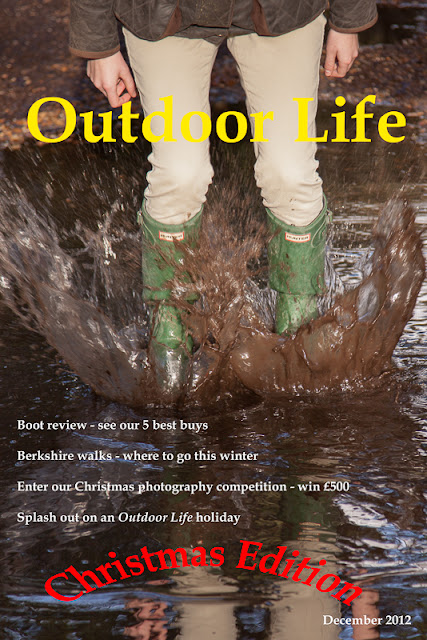