On the road again ... London revisited

March 15th and another visit to London.  This entry is reproduced in longer format in my hard copy Learning Journal so I can include copies of images from the exhibitions.  This blog version contains web links only.
This time, the plan was to move along the South Bank from Waterloo down as far as the Design Museum which is just beyond Tower Bridge.  This takes in some excellent locations for potential course photographs including the Millennium Bridge and the view to St Paul’s cathedral (lots of curves, triangles, diagonals, colours, contrasts and people .. and much more) and also takes in the Tate Modern, located in the old Bankside power station.

I had a good idea of what I had expected to find and photograph along this stretch of the embankment as far as the London scenes were concerned, but there was also one excellent opportunity that occurred that I was not aware of.  There is an open space area where graffiti artists have been able to spray their pictures and I spent some time exploring the relationships between the colours and textures of the various surfaces.  Shafts of light penetrating between the concrete structures also afforded some opportunities to photograph the impact of light and shade on colour.  Just one of the pictures I took is shown here, but I am sure these will feature again in later elements of the course. 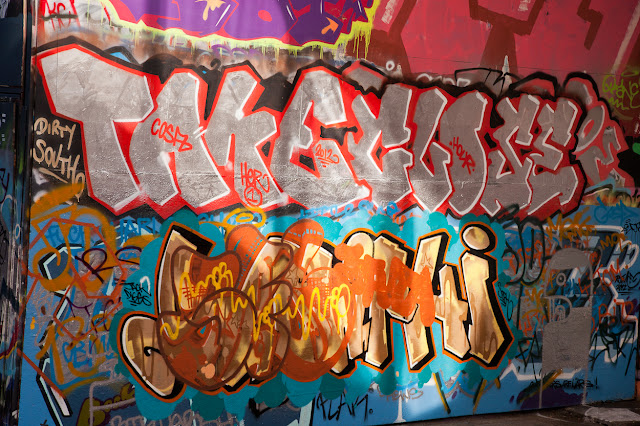 There are several current exhibitions of photography at the Tate Modern including ‘New Documentary Form’ which “explores the ways in which five contemporary artists have used the camera to explore, extend and question the power of photography as a documentary medium”.


The artists were Mitch Epstein (images around American energy production), Guy Tillim (documentary of the political situation the Congo), Boris Mikhailov (politics in the Ukraine), Luc Delahaye (novel approaches to social and political photography) and Akram Zaatari (portraits of ordinary people in the Lebanon).
There was a large amount of material in the collections and I found particular interest in the work of Luc Delahaye and Mitch Epstein.  The attraction of Delahaye, a former Magnum Photosand Newsweek photographer, were his remarkable achievements in war reportage photography whilst using only a view camera with its capability for taking only single frames at a time.  Much of his early work, recognised by an array of photojournalism awards like the Robert Capa Gold Medal on two occasions, was more ‘in your face’ war photography, although latterly his images have been more considered and remote from the immediate brutality of conflict.
O’Hagan (2011) in The Guardian describes the contribution of Delahaye thus: “His more recent work, as the three images at Tate Modern show, is characterised by its size, detail and detachment. Here, as is the case with Robert Polidori's photographs of the aftermath of Hurricane Katrina, art photography and photojournalism converge. Back in 2003, when Delahaye showed selected images from his History series at a private gallery in New York, including a beautifully composed portrait of a dead Taliban fighter lying in a ditch, he caused considerable controversy for mixing art and reportage, as well as for the attendant art-world prices the photographs commanded".
Mitch Epstein's ‘American Power’ collection is in total contrast to the aspirations of Delahaye.  Epstein focuses on the specifics of American power generation and consumption and its environmental and social impact.  The photograph ‘Gavin Coal Power Plant, Cheshire, Ohio’ taken in 2003 was my favourite in that a really unusual angle was used to photograph smoke emerging from the power station chimneys and it took a few moments to recognise what I was actually looking at – something seemed to be upside down initially, but it is just a very clever interpretation of the scene and use of angle of view.  The spiral twists of the smoke plumes make the image outstanding in my view.
The other Epstein images in the ‘American Power’ collection did not raise as much interest as the smoke plumes, but ‘Amos Coal Power Plant, Amos, West Virginia’ taken in 2004 was an interesting observation of the impact of power generation on ordinary life as the huge cooling towers very close to residential property overshadow everyday living and completely dominate the scene.