Here I need to produce a single photograph that shows that something has happened – maybe this is the chance to slaughter the garden gnome in a moment of uncontrolled fury …  The exercise is really about using a single image to put across an abstract concept or idea such as those used in advertising where it is necessary to show something that cannot be depicted directly.  The insurance industry is an obvious example where devices such as castles, embracing hands and various other symbolic depictions of security are prevalent.


Companies need a brand image or brand identity and with that must come the requirement for recognisable branding and symbolism that consumers associate with a particular product.  Although written back in the 1990, one of the best descriptions of this comes from Dobni and Zinkhan 1 (1990) in “In search of brand image: a foundation analysis” and explores the reasons for which people buy products or services for reasons other than their actual utility.  These authors often refer to Levy2 (1958) when describing the association between objects and symbols and his definition of symbols as “things which stands for or expresses something else”, also pointing out that it is a general term for instances where “an object, action, word, picture or complex behaviour is understood to mean not only itself but also some other ideas or feeling”.  I think this is a great description and although many years have passed since my employer first sent me on a workshop to learn about all this, I am glad that it has finally been of some use!!
I can think of a number of other examples:


Health products and health – energy and vitality, relaxed people, participation in sports etc. (especially for old folks after taking various potions!).  Heart attack and stroke imagery – flashes in heads and hearts.  Apples .. “an apple a day ..” is well known enough to be indicative to most people of health benefits


This exercise initially brought a number of options to mind and I considered empty bottles with a drip of liquid remaining, a crushed can, broken crockery objects (got banned from that one), a broken egg and any number of other spilled or broken items.  In the end I decided to go for a simple approach, again using the big lights at either side of the camera and at 45 degrees to the subject, which turned out to be a broken egg.  Surprisingly, you have to chuck them quite hard to get them to break with any significant splatter, which was what I was after!  I shot this initially in landscape format and cropped to square and then also in portrait format with the egg set to the bottom of the frame to allow for a caption of some sort to be run at the top. 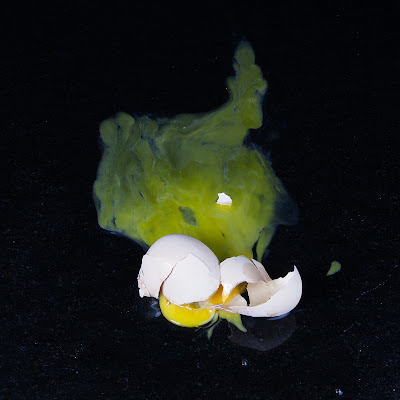 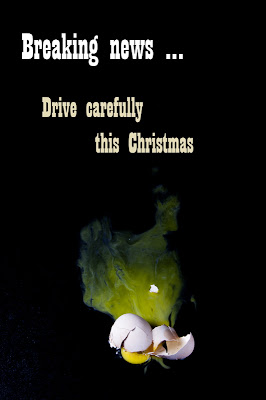 I found this an interesting exercise, especially from the perspective of the amount of thought that went into it.  Obviously, it is possible to find a million examples of ‘evidence of action’ and I was pleased with the outcome with the egg and have since searched the internet for images where broken eggs have been used and discovered a multitude of examples where this device has been used to represent accident awareness, broken homes and marriages, seat belt awareness etc.

Email ThisBlogThis!Share to TwitterShare to FacebookShare to Pinterest
Labels: 5 Illustration and narrative, Exercise 42 Evidence of action