The Shorter Oxford English Dictionary defines juxtaposition as “The action of placing two more things close together or side by side” and qualifies this by adding that this is often for comparison or contrast.  There were some useful ‘usage examples’ quotes as well; here are a couple.


“In her documentary, the director juxtaposed poverty with affluence in order to evoke more emotion from the audience”


The course notes for this exercise suggest that I should consider either a book cover illustration using several contrasting elements set up as a still life, or a larger scale shot.  I have decided to look at some options around the book cover, largely because I want to put some more effort into still life shots and indoor lighting.  I looked at a number of paperback book covers of different subjects, and other than the boring technical stuff I tend to collect the thrillers seemed to have quite a dominant theme of darkness, black backgrounds and simple motifs that alluded with various degrees of success to the topic of the book.  There was also a dominance of high contrast subjects strongly side-lit by either window light or studio lighting.  May be it’s just the stuff I read!


I decided to go with a camera related theme and made a simple contrast between a plastic toy camera and my Canon 1DMkIV and went with a ‘beginner to expert’ idea for the subject of the book.  I set this up on a blackout curtain and used a single light high and to the right to get some sharp contrast and strong slide lighting.  I also used a large flag to keep light off the part of the scene where I wanted little light to fall and therefore concentrate the viewer solely on the two cameras.  I underexposed by 1.5 stops to emphasise the contrast and give the image some punch.  This is what I came up with … 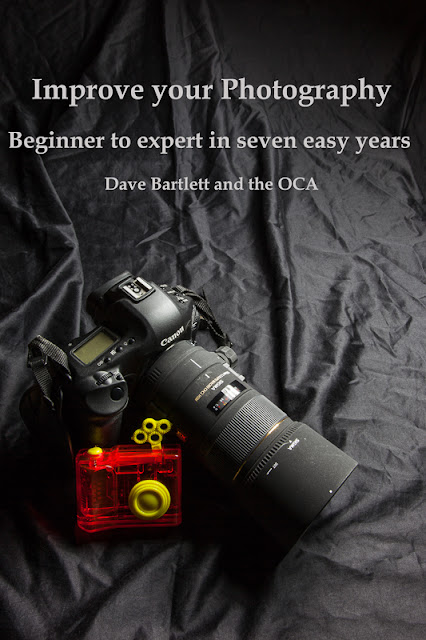