The next project covered Dividing the Frame, and the initial exercise looked at balance between objects in an image, especially in situations where the picture frame needs to be divided into different areas.  ‘Balance’ means setting up equilibrium between two or more parts of the image and in the first exercise it was demonstrated by the use of ‘weighing scales’ drawn on the image itself..
Unequal objects can be balanced by placing the largest object nearer to the centre of the frame and maximum symmetry occurs when other objects or lines radiate out from the centre of the frame to give symmetry on all sides.


Freeman (2007) states that “at the heart of composition lies the concept of balance.  Balance is the resolution of tension, opposing forces that are matched to provide equilibrium and a sense of harmony” and that the eye seeks to balance forces to reach harmony and find aesthetic pleasure in an image.  He also claims that the balance of simple images is often very clear, but that many photographs are highly complex and that balance can only be “resolved intuitively, according to what feels right”.  That made me feel much better..
Six photographs were taken from the various images I have taken to support the course so far and considered for how the balance worked in each by either looking at different objects in the image or at different colour blocks.  I actually found this the most frustrating exercise so far as it soon became very clear that the vast majority of the images I take have a single object in them and there is no balance with any other features of the picture.  I certainly managed to select some images, sometimes by cropping existing material, with which to perform the exercise, but it is certainly something that I need to be aware of as I develop further when exercises and assignments have a requirement for the content of more elements.  I think that with a background in wildlife photography based very much around portraiture, I have clearly gravitated into single element compositions.  Must think more widely about the design concepts in my images and consider bringing some tension and dynamism into the pictures ...


The images I selected were picked for what I saw as the presence of different ‘balances’, and I chose images that were balanced in favour of the left or right or were balanced centrally in the frame, and also selected material that featured objects or blocks of colour.  I did not have anything that represented blocks of tone.  The balance scales were simply a freehand sketch done on a separate layer in Photoshop CS5.
The first image was of a monument on a grave at a local churchyard and the key features of the image are equally balanced on all sides due to the symmetrical positioning of the central boss and the four bosses on the arms of the cross.  Looking horizontally, there is equality also in balance between the left, central and right hand bosses as well. 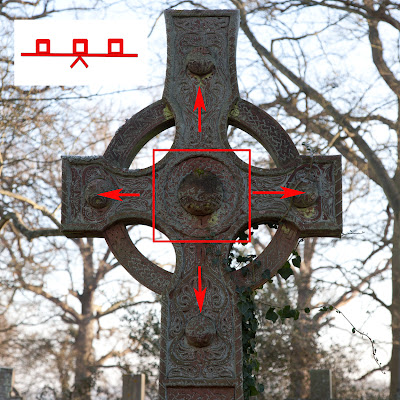 My second image was of two derelict boats at low tide near Orford Ness in Suffolk.  The larger, nearer, boat was the dominant element of the image and I therefore felt that the balance was to the right.  One thing I should have considered here was the position of the horizon which is not ideally placed, running right through the centre of the frame.  I tried a lower viewpoint, which although it allowed the horizon to be placed more ideally around the top third of the picture, cut out the boats in the background which I felt were an essential feature of the picture and placed the two old hulks in context. 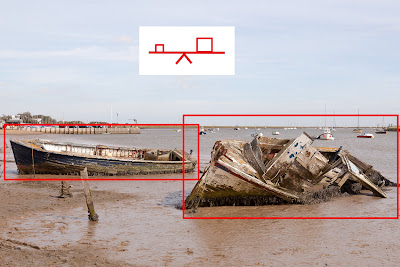 
The third picture was again taken in Suffolk and is of an old derelict monastery near Orford.  There are two main elements to the picture and a clear balance in favour of the area of masonry on the left with the arch above the crumbling ruin contributing to the ‘weight’ of the left hand side.  It is also underpinned by a greater area of grass, which again I felt pulled the balance to the left.  The small square on the beam should be further right to balance .. too much wine I think ... 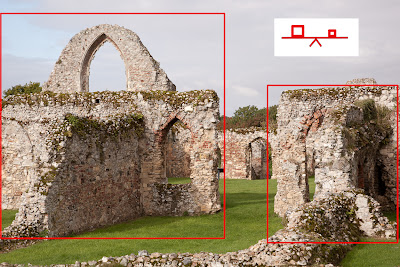 A complete change of tack for the next picture, and I used two windows from the rear elevation of a local arts centre in Berkshire.  Here I was after an even balance between two identical elements of an image, and although it is a very simple and basic interpretation of equally distributed ‘weight’, I think it is nonetheless a good example. 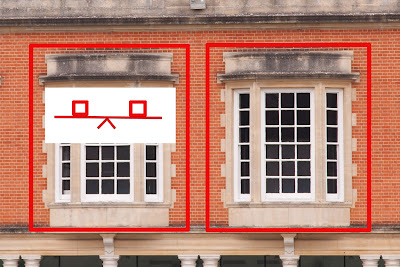 The workings of the London Eye gave me my fifth example and I chose this image because not only were the elements of substantially different size, they gave me an example of colour blocks with the heavy orange steelwork in the foreground and the lighter elements of the screen and cabling in the background. 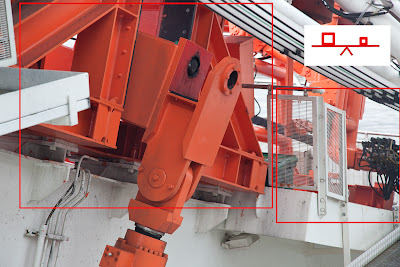 Finally, I was looking for something that was a close up shot of something smaller.  This shed on a local farm has some nice colour and texture (well, I thought so anyway ...) in it, and the old gate and pile of bricks at the side contributed a secondary element to the design, with the balance being clearly to the right of the image. 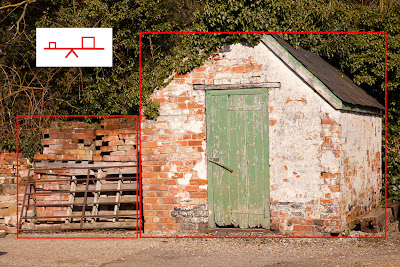 So, what did I make of this exercise?  Initially, it was a frustrating experience as I felt I lacked material from existing photographs to produce what was required, but after some early struggles it did become clear to me that I was trying to be too exacting in my interpretation of balance and looking far too much for big, separate, unconnected elements in the pictures.  Yes, these exist in some cases, but the subtlety of balance lies in most images somewhere.

Email ThisBlogThis!Share to TwitterShare to FacebookShare to Pinterest
Labels: 1 The Frame, Exercise 11 Balance